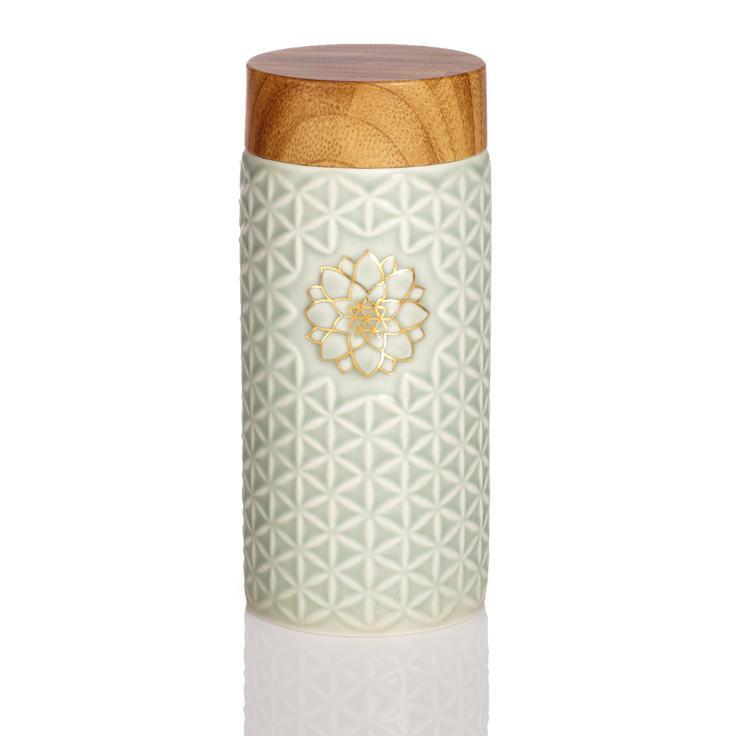 The Flower of Life is the modern name given to a geometrical figure composed of multiple evenly-spaced, overlapping circles, that are arranged so that they form a flower-like pattern with a sixfold symmetry like a hexagon.

It is considered by some to be a symbol of sacred geometry, said to contain ancient, religious value depicting the fundamental forms of space and time.

Features: Tourmaline Anion - Patented Far infrared and negative ion Technology. The tourmaline lining of the tumbler heightens the flavor and freshness of any beverage. The tourmaline's charged negative ions add a pure taste, while neutralizing harsh chlorine and other impurities.

In every ceramic piece, the delicacy of hand-carved details and exceptional artistry add to its functional and artistic values. Glazed with valuable white crystal tourmaline as part of its patented manufacturing process, the LIVEN Series utilizes a far range infrared (FIR) technology pioneered by ACERA. When applied to crystalized tourmaline, that mineral constantly releases the same healthful negative ions you breathe in near a waterfall or after a spring rain. Liquids in tourmaline become softer and more favorable as they acquire an alkaline character that promotes a healthier lifestyle.